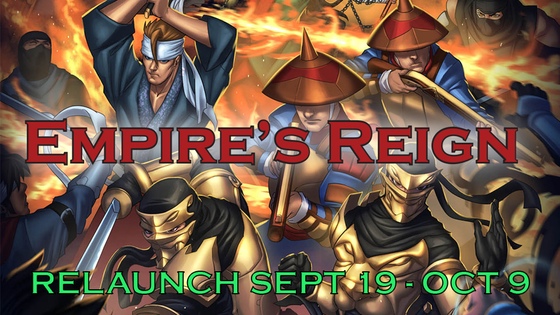 Expand the world of the Ninja Crusade and delve into the Empire's Reign! Meet new character types and new tactics to use in the war.

Latest Updates from Our Project:

I have finally gotten the go ahead from Backerkit to send out surveys, but I wanted to give everyone the heads up about them. I plan on sending them out tomorrow. Best part is, the PDF downloads for anything of the books besides Empire's Reign will be available to you to download through the survey.

If anyone has any issues with going through it, just let me know. (RE: SEND ME A MESSAGE).

It was awesome to cross the finish line with you on this project, and I want to give a shout out to all the fans who asked me to relaunch the project, promising that they'd make it happen. That shows a real dedication to The Ninja Crusade, and I hope to continue to earn our fans' fervor as we continue the line through the years!

Thanks so much, and await further updates coming soon! For now... I get to bask in yet another successful kickstarter.

We're at over 70%, which means we're almost there! I thought I'd talk a bit about some of the thought process behind the Assignments.

There's an interesting balance in Empire's Reign, between soldiers who are outright against the ninja, those who are fascinated by the ninja and those somewhere in the middle.

Looking at the assignments as they are written, there are a few that obviously take the side of aggression:

The two Assignments that push into the realm of fascination are:

The other four Assignments fall somewhere in the middle, with the Black Smokes and Engineers hating the ninja, but usually just do to the propaganda most of the citizens of the Empire have fallen pretty to. The Jadesmiths and Silver Blades are on the higher rung of the army, giving them access to more information, leaving them with an inkling to destroy the ninja, but also to study them.

We're super excited here at Third Eye Games to already be off to a great start! We're very close to hitting our goal, but it's a matter of getting the word out. Share this Kickstarter with as many of your friends and contacts as you can, so we hit it even faster!

I've been talking with the team and we've decided that we'll be including more information on bandit gangs and how they influence the Empire as well. So, we're jamming even more awesome stuff into Empire’s Reign! Gonna make it one hell of an addition to The Ninja Crusade 2nd Edition.

If anyone has any questions/comments/etc., just let me know. Otherwise, I'm preparing a few other updates for the duration of the Kickstarter.

Remember that the Empire’s Reign relaunch is only going for 20 days, so plan accordingly.

I received the following question from a backer:

"Can you describe what you have at your mind [for Mass combat], what things these will/shall emulate/do?"

While still in development, I can definitely tell you what we plan to do with Mass Combat rules for Empire’s Reign. First off, the main way to play will always be to have individual characters making a difference. You'll make your soldier or ninja type and turn the tide of war with your individual actions, of course.

Mass combat rules, however, will give a new way to decide the fate of major battles in The Ninja Crusade 2nd Edition. Let's say that the Izou Army is descending upon a certain city where ninja are known to be. The rules will take certain things into accounts (i.e. strategy, general's skill set, environment, weaponry, numbers, etc.) and then, of course, some die rolls to determine the outcome of the battle.

The individual characters will also have ways to affect these things. For instance, A mission to halt one of the army's pathways to the city would reduce their numbers. Finding and destroying one of their nearby weapon stores would decrease their weaponry stats. Setting a large number of traps or jutsu in the area may affect their environment stats. There are a lot of different ways to approach the strategy, but the Izou War Machine is coming. There's no stopping it, but you can definitely work to slow it down.

Once we have more concrete rules down, I'll definitely share them here!